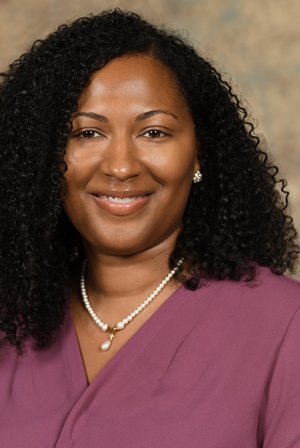 She contributed to the development of the Women’s Mental Health Program at Lindner Center of HOPE. Dr. Johnson has completing training in the assessment and treatment of postpartum mental illnesses. She is a board member of the International Society of Reproductive Psychiatry and a member of the Ohio Pregnancy-Associated Mortality Review Committee.

Dr. Johnson has earned many honors, including official recognition for demonstrating exceptional service at University Hospital, two travel scholarships to attend APA Annual Meetings, The Van Buren O. Hammett Memorial Award for Outstanding Performance in Psychiatry from Drexel University College of Medicine, and several other academic achievements. She was selected as one of Cincinnati Magazine’s Top Doctors 2019, 2020, and 2021.

Dr. Johnson has presented on the topics of women’s and minority mental health issues. She has been interviewed or written for online publications such as Doximity’s Op-Med, KevinMD, The Atlantic, Bustle, and womenshealth.gov.