Is our biological clock leading us to gain weight?

The role of the circadian system in obesity and disordered eating

The circadian system is the body’s endogenous timekeeper, a network of hierarchically-organized structures (“clocks” or “oscillators”) in nucleated cells, which regulates a variety of biological processes (including the cell cycle, metabolism, growth, development and sleep/activity cycles) by generating outputs in a rhythmical manner. The suprachiasmatic nucleus (SCN) in the hypothalamus acts as the “master” pacemaker by generating periodic outputs targeting clocks in peripheral cells. The endogenous SCN period is greater than 24 hours, but it resets every day in response to environmental signals.  The main  synchronizer for the SCN is the periodical light/dark signal over the course of 24 hours.  Additional environmental synchronizers include feeding and social activity.  The circadian system enables  organisms to adapt to environmental changes and optimize function, playing a central role in the maintenance of health and illness.  Research has linked circadian dysregulation to a variety of disorders including cancer, cardiovascular disease, metabolic abnormalities and obesity in humans and animals.

Recent studies support the role of circadian dysfunction in the development and maintenance of obesity.  Circadian misalignment can manifest as metabolic abnormalities, sleep disturbances, delayed sleep phase (evening preference), abnormalities in daily rest/activity rhythms and disordered eating patterns. Both endogenous (e.g., genetic) and exogenous factors are involved in circadian dysfunction. External factors include decreased sleep duration, jet lag, frequent snacking and nighttime eating and exposure to bright light. Epidemiological data show shift work is an independent risk factor for obesity and increased metabolic risk. Decreased sleep duration is associated with increased risk for obesity and metabolic disease. Among children, sleep loss is associated with the development of obesity and is a predictor of lifelong obesity. The increasing prevalence of obesity in recent decades has coincided with trends such as shortened sleep duration, light pollution, increased nighttime exposure to bright light and increasing shift work. 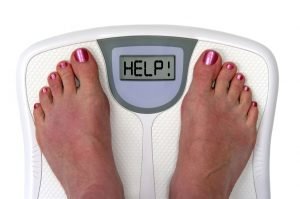 Sleep pattern changes affect appetite and eating behaviors and vice versa. Sleep restriction has been associated with changes in circadian hormonal patterns, which result in increased appetite, hunger and food choices such as increased preference for sweets.  In turn, alterations in eating patterns have a dysregulating effect on the circadian system. For instance, overeating has been associated with decreased sleep duration, high dietary fat and carbohydrate intake with decreased short wave sleep and high increased nighttime arousal respectively.

The timing of food consumption plays an important role in metabolism and body weight. Nighttime eating leads to increased insulin resistance and worsened glucose tolerance and lipid levels than meals consumed during the daytime. Among bariatric patients, eating late in the day has been associated with less post-operative weight loss.  In addition, irregular eating patterns are associated with abnormal weight gain, increased binge eating and greater eating disorder severity. Conversely, appropriate timing of eating and regularization of meal times appear to have a beneficial effect. Animal studies show that time restricted feeding (limiting feedings to a timeframe appropriate to the species’ diurnal/nocturnal pattern) is associated with decreased obesity. Among humans, an app study showed an association between time-restricted feeding and sustained weight loss.

As we have seen, the regulation of metabolism and body weight appear to depend on the optimal function of the circadian system, which requires appropriately timed exposure to synchronizing stimuli. Interventional studies suggest that manipulation of synchronizers may be beneficial in treating disordered eating behaviors, metabolic abnormalities and obesity. Potential interventions for circadian dysfunction would optimize the timing of synchronizers (such as bright light therapy, timing of food intake and time-restricting feeding), regularize rest/activity circadian rhythms (by increasing regular exercise, maintain a consistent waking up schedule), or the administration of medications according to circadian phase. The treatment of circadian dysfunction promises improved outcomes in the prevention and treatment of obesity, but further research is needed.  New technologies and methods will enable a thorough characterization of circadian function is obesity and eating disorders and determine whether the circadian system is a potential target for chronotherapeutic interventions.

The Lindner Center of HOPE is conducting a comprehensive study of circadian function in adults with obesity with and without binge eating disorder.  For more information, contact Brian or George at (513) 536-0707 or visit http://www.lcoh.info

self-esteem and self-worth in our youth will bring about numerous long-lasting, positive changes that Cupid’s arrow could only dream of creating.