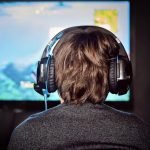 Screen time recommendations vary by the child’s age. Presently, the American Academy of Pediatrics (AAP) recommends that for children younger than 18 months of age, the use of screen media other than video-chatting should mostly be discouraged. For children 2 to 5 years of age screens are acceptable for no more than one hour per day thus allowing them ample time to engage in other activities promoting growth. For older children, current guidelines encourage proactive development of an individualized Family Media Use Plan (www.healthychildren.org/MediaUsePlan) that takes in consideration the particular child’s maturation and needs. This article will focus on a few recent neurobiological findings addressing the effects of excessive screen time exposure on the growing brain in youth to help us be better informed as parents, educators and healthcare workers.

Preschoolers – if the content is educational, that’s all that matters, not how it is presented, right? Wrong!

In a 2019 study by Cincinnati Children’s Hospital researchers documented associations between higher screen use and lower measures of brain structure and skills in preschool-aged children. The team examined the screen time habits and cognitive skills of 47 children, 3 to 5 years of age and conducted brain scans on each child.  Prior to the scans, the kids took a cognitive test and the parents filled out a questionnaire regarding their child’s screen time habits. The final score, called the ScreenQ score, was based on a number of criteria focusing on AAP recommendations, including whether the child was exposed to screens before 18 months of age, if they had a television in their room, and how much time they spend in front of screens. Scores ranged from zero to 26 and the higher scores represented less of an adherence to general screen time recommendations from the AAP. It was observed that higher ScreenQ scores were associated with lower brain white matter integrity, poorer expressive language and poorer cognitive skills suggesting that excessive time in front of a screen, even if the content is considered educational, might decrease cognitive skills in preschoolers. (1)

A 2018 study from Cincinnati Children’s Hospital explored the time spent using screen-based media versus reading an actual book on the functional connectivity of the reading-related brain regions in children aged 8-12. Time spent on screens might be linked to impaired shifts in brain connectivity, while reading a book is linked to more beneficial neurobiological changes. The researchers had families rate how much time their children spent on various screens and how much time they spent reading actual books. The children’s brains were scanned, to assess how regions involved in language were connected, and it turned out that screen time was linked to poorer connectivity in areas that govern language and cognitive control. Reading a physical book, on the other hand, was linked to better connectivity in these regions. These findings underscore the importance of children reading real books to support healthy brain development and literacy and to consider limiting excessive screen time, even if some of the content presented through screens might be related to reading and considered educational. (2)

A 2019 study published in NeuroImage explored the effect of screen media activity on structural brain changes and how this might affect specific behaviors in 9-11 year olds. Structural scans of the brains of 4277 participants were correlated to screen activity like watching television, playing video games, or using social media. Some finding were expected, like individuals with significant exposure to activities engaging the visual system (watching TV or video) showing structural patterns suggestive of greater maturation in the visual system (i.e., thinner cortex). Some structural brain changes related to increased screen exposure were associated with more psychological issues and poorer performance on cognitive tests, while other latent variables did not show such relationship. The authors summarized that it remains difficult to conclude that brain structural characteristics related to screen media activity have uniformly negative consequences. Moreover, while some media activity associated brain structural changes were related to poorer cognitive performance, others were related to better cognitive performance suggesting that screen media activity can not be simplified as overarchingly “bad for the brain or for brain related functioning”.

Regardless of the age group discussed, one strategy to mitigate the potential risks associated with excessive exposure to screens is to ensure that the child has an overall well balanced and healthy lifestyle. This includes reinforcing proper eating and sleeping habits adequate for the age of the child, sufficient and diverse physical activity and providing plenty of opportunities for not screen related social interactions. Establishing a flexible family matrix of screen rated “rules” which dynamically adapts to the growing child would ensure that parents and educators factor in screen time exposure as one of the determinants when raising a healthy kid.