Jon Zipperstein, a generous donor to Lindner Center of HOPE 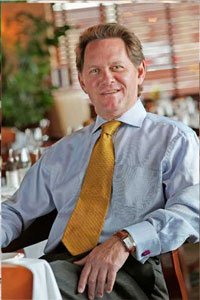 Jon Zipperstein, co-owner of Embers Restaurant, has used his culinary talents over the years to not only entertain celebrities and Cincinnati diners but also to support events that impact the well being of our community. Since opening its doors in August of 2008, Lindner Center of HOPE has been the recipient of such efforts. His commitment to raise awareness of causes important to him and improve the lives of those in the community, in which he lives, has made him a tireless supporter. Zipperstein and his staff deliver top notch cuisine with a trendy, contemporary twist all while making beautiful meals and lasting memories.

He has been a good friend and has given tirelessly to Lindner Center of HOPE through many events including participation in the Queen City Ball which raised over $325,000 for the Center and the annual anniversary event he has hosted since 2009. In addition to supporting Lindner Center of HOPE, Embers Restaurant actively participates with the Marvin Lewis Community Fund, Leukemia/ Lymphoma Society, Epilepsy Center at the Neuroscience Institute, and Cincinnati International Wine Festival and its charities.

His backing and commitment to the work Lindner Center of HOPE is delivering began years ago when, in conversations with Edyth and Carl Lindner, he heard about the need for state-of-the-science hospital based mental health services. He listened to accounts, both personal and acquaintances and quickly recognized the need for added mental health services in our community. “Edyth and Carl Lindner and the entire Lindner family have always been visionaries,” says Zipperstein. “They could look toward the future and see things that needed to happen, things that could increase community benefit, health and wellness,” Zipperstein says. “I was always impressed that they cared about things that often others didn’t want to touch, issues that carried stigma or areas that others did not support financially.”

“Today, there is such gratification in knowing that we’ve come a long way from where we were 10 to 15 years ago when we talk about mental illness. There’s more awareness, less bias, improved treatments and advancement in research that propels us forward. In large part it’s because of people like the Lindner’s and other donors and volunteers who are champions and have led the way to help put mental health issues on par with physical health concerns,” Zipperstein says.