Make a GiftMore than a Diagnosis

So much more than the diagnosis

Sara Hunter, a past patient of Lindner Center of HOPE 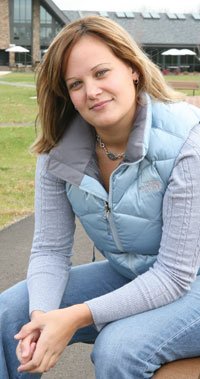 Sara Hunter, 29, has her master’s in mental health counseling and serves as a licensed therapist at a private therapeutic boarding school for young women. Beyond her education and training, Sara has a lot of personal insight into the work she’s doing with young women. Sara has been living with Obsessive Compulsive Disorder (OCD) for the majority of her life. She started showing signs of OCD when she was three years old. “I can remember feeling the need to line up my stuffed animals in order of their size and shape, the creases in my socks had to be perfect and I felt the urge to wash my hands until the skin was cracked and bleeding,” she said. “I knew the obsessive thoughts racing through my mind made no sense, however giving into the rituals was the only way I knew to relieve the intense anxiety I had been feeling.” Sara’s struggles with OCD as well as her feeling of shame related to having the disorder continued throughout young adulthood. For the first time in my life I thought about killing myself. In this moment when I felt I couldn’t go on anymore I allowed myself to ask for help, something I don’t ordinarily do. I told my parents that I needed help and wasn’t safe.”

Sara chose to spend three days straight on the adult inpatient unit at Lindner Center of HOPE. It was the first time she was hospitalized on an inpatient unit and despite her feelings of wanting to appear in control of her life she allowed herself to receive support from the doctors and staff at the Lindner Center. “I felt safe and never as if I was being judged. Each person on the staff was so kind and would really reach out and listen to what I was going through with unconditional care.”Sara added, “When I left the Lindner Center, I felt like I was leaving on solid ground. I had worked with the team of doctors, Mike and other staff to create a plan that supported my needs and my hopes for moving on with my life. I felt like I was leaving with hope.”Sara believes one of the most important lessons she has learned is that a diagnosis is not the defining aspect of who a person is. “It’s something that I personally deal with and it’s something the clients I work with deal with, it’s a part of what we experience but it’s not who we are. I have learned that my diagnosis of OCD is something I will always have to be aware of, something I will need to work with but not something that will define my worth or potential in life.”